Assange sneaks into conference as a full-body 3D hologram

Julian Assange has transcended the confinement of his Ecuadorian embassy asylum to attend the 2014 Nantucket Project – as a hologram. In his ghostly entirety Assange was speaking about censorship, control and manipulation of history. 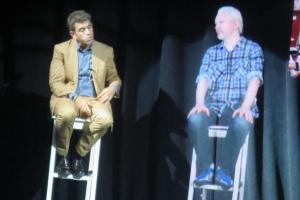 Speaking with filmmaker Eugene Jarecki, Assange closed the 2014 event, sharing his thoughts on importance of research and free access to information, and risks of censorship.

“As a researcher, I'm all too well aware of what people are now calling Google blindness, that the information you can’t find on the Internet doesn’t exist,” Assange said, not missing a chance to take on the corporation and call it a “revolving door” of NSA and close partner of the US Government. In the digital world, Assange says, people can just “delete history very easily,” a notion he attributes to Orwell’s writing: “He who controls the present controls the past. He who controls the past controls the future.”

“But the last five years have been the greatest period of education that ever existed ,” Assange’s hologram added in front of the audience gathered in a tent overlooking Nantucket Harbor, Massachusetts. “The greatest number of people to the greatest geographic extent are learning about their environment, and the complexities of the international environment.”

“My conclusion is that the best way to go about changing things is simply to act. At its essence, when civilization is working well, it commits us to not do dumb things again. To do that, we have to have the ability to learn from each other, and learn from the past, how our institutions actually behave, their internal dialogue. Ideas can only be as good as their inputs.”

Assange and Jarecki ended their conversation with a hologram high-five, concluding the whistleblowers’ first almost-live appearance in years.

Jarecki compared the Wikileaks founder’s ghostly appearance and speech to Star Wars: “In a wink at life imitating art,” Jarecki wrote for The Guardian. “It’s the same old story of rebels against an empire, but in this case, Assange and kindred spirits such as Edward Snowden, Chelsea Manning and Aaron Swartz see themselves as a real life band of rebels, loosely arrayed against an unholy global alliance of government and economic interests.”

The Nantucket Project is an annual conference held over the past three years, which strives to provide a relaxed setting to gathered innovators, entrepreneurs, thinkers and decision-makers.