The Guardian editor Alan Rusbridger on Tuesday vigorously defended his decision to publish a series of articles based on the secret files leaked by former National Security Agency contractor Edward Snowden, telling a parliamentary committee that the right to continue pursuing the story goes to the heart of press freedoms and democracy in Britain. 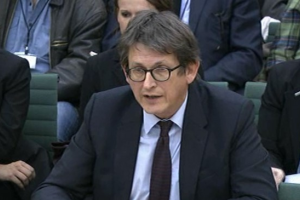 Rusbridger also told lawmakers that the Guardian had published only 1 percent of the 58,000 files it had received from Snowden. “I would not expect us to be publishing a huge amount more,” he said.

The hearing on the Guardian’s handling of intelligence data leaked by Snowden, who is living in self-imposed exile in Moscow, drew the attention of free-speech advocates on both sides of the Atlantic. Rusbridger faced more than an hour of questioning during the Home Affairs Select Committee’s counterterrorism hearing, testifying in an occasionally combative public grilling of both the Guardian and its editor.

Along with The Washington Post, the Guardian — a London-based news outlet with a print circulation under 200,000 but online readers numbering in the many millions — was the first to publish reports based on the Snowden leaks. In response, British authorities have acted far more aggressively than U.S. or other European officials, launching what Rusbridger and international free-speech advocates have decried as a campaign of “intimidation” against the paper. Actions taken include the coerced destruction of Snowden data being held at the Guardian’s London headquarters and public denunciations by Prime Minister David Cameron, as well as the decision to summon Rusbridger for questioning by lawmakers on Tuesday.

During the hearing, a number of left-leaning politicians appeared to cheer the editor on for shedding light on the lengths to which U.S. and British intelligence agencies have gone to in their global information-gathering efforts. But others, particularly Conservative lawmakers, challenged the decision to publish and pressed Rusbridger on whether he had violated British law.

Mark Reckless, a Conservative, questioned Rusbridger repeatedly about the Guardian’s decision to share its trove of Snowden files — including documents containing the names of British intelligence operatives — with the New York Times. Names in the documents, Rusbridger said, were not redacted before being handed over because of the vast resources that would have required.

Reckless said the decision appeared to violate British counterterrorism laws. He then asked Rusbridger whether he felt he should be prosecuted for allowing such a transfer of information.

Rusbridger responded, “I think it depends on your view of a free press.”

Earlier in the hearing, Labor lawmaker Keith Vaz questioned Rusbridger about testimony last month in which John Sawers, head of Britain’s Secret Intelligence Service, told lawmakers that the Guardian’s decision to publish had the country’s enemies “rubbing their hands with glee.” Vaz then bluntly asked Rusbridger, “Do you love this country?”

“I'm slightly surprised to be asked the question, but, yes, we are patriots, and one of the things we are patriotic about is the nature of democracy, the nature of a free press and the fact that one can, in this country, discuss and report these things,” Rusbridger responded.

Leading free-speech advocates have defended the Guardian’s right to publish the files leaked by Snowden, with the hearing prompting several protest letters, including one in which U.S. journalist Carl Bernstein described Rusbridger’s forced appearance Tuesday as “dangerously pernicious.” After the hearing, Padraig Reidy, a spokesman for Index on Censorship, a London-based free-speech organization, called Rusbridger’s grilling a worrying sign.

“The government has been reassuring us for the last few years that politicians will never interfere with the press,” Reidy said. Tuesday’s interrogation showed that “when a story comes out they don’t like, they start making threatening noises,” he added.

At the hearing, Rusbridger said that over the course of the Guardian’s publication of the Snowden material, the paper had consulted government agencies on both sides of the Atlantic more than 100 times.

“We will continue to consult them, but we are not going to be put off by intimidation,” he said, adding, “but nor are we going to behave recklessly.”