Imagine attending a stand-up comedy show where entrance to the club is free but you are told that you will be charged a specific price per laugh. The more you laugh, the more you pay. 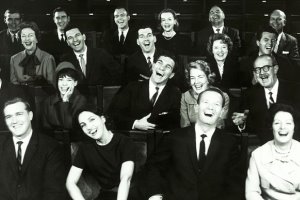 If you don’t laugh, you don’t pay. Exactly that type of “pay-per-laugh” business model is being tested at Teatreneu, a comedy club in Barcelona.

What makes this pay-per-laugh model possible is facial recognition software loaded onto tablets that are attached to the backs of seats in the theater. This facial recognition technology can (in theory) detect each and every laugh and then charge people approximately $0.38 per laugh (with a maximum of $30 per show). For now, this innovative pay-per-laugh model appears to be a winner for Spanish comedians. According to Teatreneu, there has been a 35 percent jump in the number of spectators attending its pay-per-laugh shows.

After all, what’s the risk of going? If the show is lame, you may not pay anything. Moreover, there has been an uptick in the average ticket price charged to customers. What the theater found was that average ticket prices had increased by approximately $7.50 as a result of this pay-per-laugh model.

In short, a pay-per-laugh model results in more customers, who generally pay a higher price. That’s no laughing matter. Of course, it’s easy to dismiss all this as a slick marketing tactic designed to bring in curious visitors — and win marketing awards in Cannes — rather than as the basis for a future business model.

For one, there’s bound to be some debate amongst patrons about what actually constitutes a laugh – is the beginnings of a wry smile the same as a genuine laugh? Should convulsive body laughs count more than sarcastic half-smiles? And let’s face it — from a comic’s perspective, this could become a case of be-careful-what-you-wish-for. If you bomb one night, you might walk away with nothing.

However, if you think about it, “pay-per-laugh” is really just a technologically enhanced version of “name-your-own-price” – only in this case, the process of price negotiation happens after the show, not before the show, and it’s based on your actual, physical responses. The pay-per-laugh model takes away most of the risk for the consumer – they know that they will pay at most $30, and that’s only if they laugh non-stop throughout the show. If the show is terrible, they pay nothing, and walk away with an amusing anecdote to tell their friends.

Digital technology has already shown a unique ability to upend our conventional thinking about how much to compensate creators for their works, by deconstructing any creative work into a series of digital 1s and 0s. This time, digital technology – in the form of facial recognition software – would play a key role in determining who gets paid and how much. There’s something remarkably democratic about the notion that comedians should get paid by the number of laughs they generate.

Let’s push on this a bit further. Stand-up comedians in Barcelona may be just the beginning. (And Teatreneu says that other comedy clubs in Spain are starting to copy the model.) Think of the world of elite chefs and gourmet dining experiences. If you think about taste sensations purely from the perspective of what’s happening inside your mouth and within your brain, maybe there would be a way to pay for a restaurant meal based purely on the types of flavor sensations in your mouth or neurotransmitters triggered inside your brain.

That might take away the sting of paying incredible prices for specific items on the menu. Instead of reciting “daily specials,” waiters would simply give you a few price points for bold, experimental dishes the chef is working on today. Sound too-far-fetched? Well, new advances in wearable technology and sensors that measure factors such as pulse rate are making possible a number of innovative ways to monitor 24/7 how the human body responds to surrounding stimuli.

Putting tablets on the backs of theater chairs and rigging them up with facial recognition technology is actually a bit cumbersome in comparison to what’s possible with digital devices worn directly on the body. Some even conjecture that an innovation such as the new Apple Watch might turn out to be a way to judge the emotional state of the user. Changes on the surface of the skin or a faster heart rate could signal nervousness or excitement.

Clearly the potential exists for more innovation on how wearable technology can measure physical responses to certain external stimuli. At some point, all the data from sensors worn next to your body might be used to develop a new payment model based on your emotional or psychological state. Your mind might tell you to pay one price, but your body would tell you exactly the right price you’re willing to pay.