Wikileaking embassy-stayer Julian Assange has accused Google of being born bad and getting badder as it grew. We know how Assange feels about Google, and we know how Google feels about Assange.

The WikiLeaks man, writing in a new book entitled When Google Met WikiLeaks, says that Google is an evil, bad, government sanctioned and supporting blight on the internet. Google says that Assange is paranoid.

Assange seems to have more muck to throw around, though, and accuses Google of being something of a state puppet that is possibly dangling from the arm of Hillary Clinton. He reckons that Clinton punked him through Schmidt and bagged a couple of State-suits a free lunch on his tab. Writing about a meeting between him, Schmidt, Schmidt's girlfriend and two other people, Assange realised that perhaps his reasoning for the meeting was different to the other attendees'.

"At this point, the delegation was one part Google, three parts US foreign policy establishment, but I was still none the wiser," said Assange. However, later when the state made an approach on WikiLeaks, he made more of a leap.

"It was at this point that I realised Eric Schmidt might not have been an emissary of Google alone. Whether officially or not, he had been keeping some company that placed him very close to Washington, DC, including a well-documented relationship with President Obama. Not only had Hillary Clinton's people known that Eric Schmidt's partner had visited me, but they had also elected to use her as a back channel," he wrote. 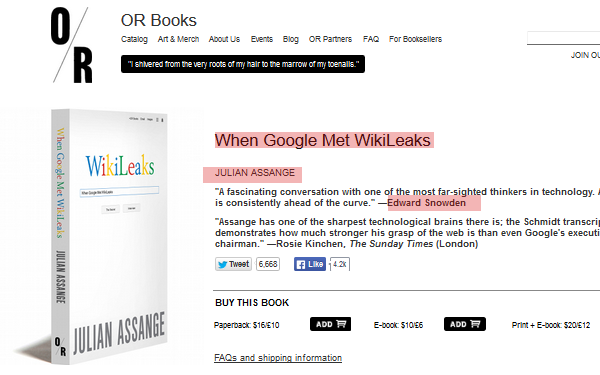 "He's of course writing from the, shall we say, luxury lodgings of the local embassy in London," Schmidt said earlier. "The fact of the matter is Julian is very paranoid about things. Google never collaborated with the NSA and, in fact, we've fought very hard against what they did." Assange, though, has stuck to his guns and in the book he issues a wake-up call to people who use Google services. That call is a warning and a reminder that Google has always had government links.

"Nobody wants to acknowledge that Google has grown big and bad. But it has. Schmidt's tenure as CEO saw Google integrate with the shadiest of US power structures as it expanded into a geographically invasive megacorporation. But Google has always been comfortable with this proximity," he said. "And even as Schmidt's Google developed an image as the overly friendly giant of global tech, it was building a close relationship with the intelligence community."