In a mission statement last year the US National Security Agency described how it would continue to expand its power and assert itself as the global leader in clandestine surveillance, according to a new report based on the Edward Snowden leaks. 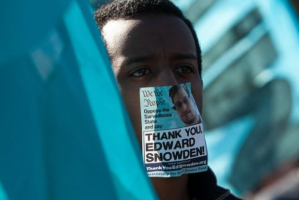 The five-page document brought to light Friday by the New York Times reveals the intelligence agency’s intention to “aggressively pursue legal authorities and a policy framework mapped more fully to the information age.” The spy agency sought the ability to trace “anyone, anywhere, anytime,” according to its 2012 mission statement.

Dated February 2012, the memo was written after PRISM and many of the other programs that have since outraged the public were implemented. It describes a four-year plan to push the NSA past its current status and into “the golden age of SIGINT,” code for signals intelligence.

“The interpretation and guidelines for applying our authorities, and in some cases the authorities themselves, have not kept pace with the complexity of the technology and target environments, or the operational expectations levied on NSA’s mission.”

The document, given the name “SIGINT Strategy 2012-2016,” falls short of explaining exactly how it would go about assuming more power, but does make clear that the so-called “culture of compliance” would not give up any concessions. The paper indicates NSA leaders communicated the need for more power in order to effectively carry out its duties.

NSA officials did note their plan to subvert cyber-security techniques so intelligence analysts are able to extract information on “anyone, anytime, anywhere.” Using both technical and human intelligence gathering methods, the mission statement sought to “revolutionize” data collection by influencing “the global commercial encryption market through commercial relationships” with more foreign partners.

This memo surfaces as a number of US lawmakers have announced their support for bills that would curb the NSA’s power and possibly grant the agency less funding. Amid allegations that the NSA monitored German Chancellor Angela Merkel and Brazilian president Dilma Rousseff, the international community has decried the NSA’s activity, with a number of nations vowing to reconsider their relations with the US.

Yet senior intelligence officials who spoke to the Times about the mission statement said its goals were plain and reasonable. One source pointed to the legal stipulation requiring the NSA, if it had been monitoring a terrorism suspect overseas, to seek legal approval in order to continue surveillance if that suspect enters the US.

“NSA’s SIGINT strategy is designed to guide investments in future capabilities and close gaps in current capabilities,” the agency said in a statement released in response to the mission statement’s publication. “In an ever-changing technology and telecommunications environment, NSA tries to get in front of the issues to better fulfill the foreign-intelligence requirements of the US government.”

To meet such requirements, the NSA notes that it hopes to rely less on installing so-called back door policies on messaging services like Google and Facebook. Instead, one of its goals is to “continue to invest in the industrial base and drive the state of the art for high performance computing to maintain pre-eminent cryptanalytic capability for the nation.”

Instead of tapering off, as the public and some lawmakers have hoped, intelligence officials make it clear they intended to “identify new access, collection and exploitation methods by leveraging global business trends in data and communication services.”