The world has become a more dangerous place after Edward Snowden’s whistleblowing revelations, as it helped the people who want to “blow up our families” and evade intelligence, British Prime Minister David Cameron said. 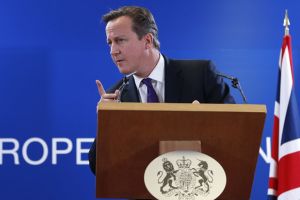 Speaking at a news conference during the European Council meeting in Brussels, Cameron said that the classified data that Snowden leaked would make it harder for Britain and other countries to provide security for their citizens.

“What Snowden is doing and, to an extent, what the newspapers are doing in helping him do what he is doing, is frankly signaling to people, who mean to do us harm, how to evade and avoid intelligence and surveillance and other techniques,” he said.

This week’s EU summit has been overshadowed by allegations that the US has tapped the mobile phone of German Chancellor Angela Merkel, and was spying on France, Italy and other states.

The European leaders were angered by the reports, but Cameron appeared to be on a different wavelength as he failed to come up with any condemnation of the US eavesdropping during the two days of the summit.

Britain came under fire in Brussels following accusations that it assisted the NSA in its surveillance activities.

Italian Prime Minister Enrico Letta attacked Cameron after media reports claimed that the UK had intercepted secret Italian communications and then passed them to the NSA.

Cameron declined to answer questions about Britain's possible involvement in NSA spying, only saying that its intelligence services routinely shared information with other European countries and were subject to proper oversight.

According to Cameron, the people needed to adopt a “cold-hearted” view of what the intelligence services did rather than what he referred to as a “lah-di-dah, airy-fairy” view.

White House National Security Council spokesperson Caitlin Hayden, when asked by the BBC if the US had ever spied on Cameron, said: "His communications have not, are not and will not be monitored by the US."

On Friday, EU leaders issued a joint statement saying that the surveillance in Europe had raised “deep concerns” among citizens and may harm cooperation between the EU and the US, particularly in counter-terrorism.

The Telegraph said Cameron was pressured into signing the document by Germany and France, who are demanding a no-spying pact between European countries and the US.

The German authorities have also joined forces with Brazil to push for the adoption of a UN General Resolution that promotes the right of privacy on the internet, which is seen as a first major international move to restrain the NSA's intrusions into the online communications of foreign citizens.

According to The Cable, that the diplomats from the two countries met with a small group of Latin American and European representatives in New York on Thursday to consider a draft resolution that calls for expanding privacy rights contained in the International Covenant Civil and Political Rights to the online world.