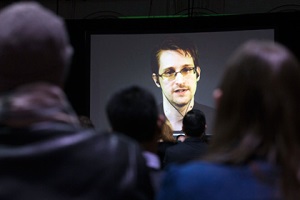 The primary focus of Oliver’s criticism is that the Patriot Act, specifically the controversial Section 215, is set to expire on June 1 unless the government reauthorizes the mass surveillance collection program.

Looking to bring attention to the NSA’s intrusive technology, the comedian spent “48 paranoid hours in Moscow” to do a half-humorous, half-serious interview with the “the most famous hero and/or traitor in recent American history” who leaked a trove of documents about the U.S. government’s surveillance programs to journalists in 2013. Asked by Oliver if he misses home, Snowden said “my country is something that travels with me. I do miss my country, I do miss my home, I do miss my family.” Snowden said that the U.S. was spying on anybody they could remotely link to terrorist activities, and in some cases, no connection whatsoever. Snowden said he felt it was his duty to let the American people decide if this is the government they want.

“The NSA has the greatest surveillance capabilities that we’ve ever seen in history,” said Snowden. “Now what they’ll argue is that they don’t use this for nefarious purposes against American citizens. In some ways that’s true, but the real problem is they’re using these capabilities to make us vulnerable to them and then saying, ‘Well, I have a gun pointed at your head, I’m not going to pull the trigger. Trust me.’”

Snowden warned that while some NSA programs were helpful to the country’s intelligence officials, spying had started coming against American citizens themselves  and their security in wide-ranging domestic surveillance. Snowden says he understands that he leaked top-secret information, but he trusts the journalists it was given to and that he felt he needed to take the risk on behalf of Americans’ civil liberties being undermined by their own government.

“I’ve evaluated all the documents that are in the archive,” said Snowden. “I do understand what I turned over.” Regarding the trove of documents Snowden leaked to journalists, he said he’s “not handling anything anymore, it’s been passed onto journalists” – a risk Snowden said he was willing to take. “You will never be completely free from risk if you’re free and safe. The only time you can be completely free from risk is when you’re in prison,” Snowden said of his decision to leak the documents. He added that he was “terrified” in the initials days after he leaked the documents and fled to Hong Kong and later granted asylum in Russia.

“I was initially terrified that this was going to be a three-day story. Everybody was going to forget about it,” he told Oliver. “But when I saw that everybody in the world said, ‘Whoa, this is a problem, we have to do something about this,’ it felt like vindication. Oliver showed Snowden video of random Americans being interviewed on the street in Times Square. Many of the people asked about Snowden had little idea who he was or what he’d actually done.

“You can’t expect everybody to be uniformly informed,” said Snowden, adding that the NSA surveillance is a “complicated conversation… It’s a real challenge to figure out. How do we communicate things that require sort of years and years of technical understanding, and compress that into seconds of speech, so I’m sympathetic to the problem.”

In a comical aside during the interview, Oliver asked Snowden to make the issue connect with Americans by bringing up whether or not the government is analyzing people’s “d*** pics.” “If you have your email somewhere like Gmail, hosted on a server overseas or transferred overseas or [if it] at any time crosses outside the borders of the United States, your junk ends up in the database,” said Snowden.

“Even if you send it to somebody within the United States, your wholly domestic communication between you and your wife can go from New York to London and back and get caught up in the database. “The good news is, there is no [government] program named ‘The D*** Pic Program,’” says Snowden. “The bad news is they are still collecting everybody’s information, including your d*** pics.”