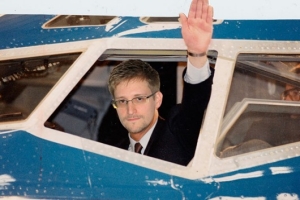 The event, which was simultaneously translated, marks the first time Edward Snowden has spoken live to an audience in France.

Reacting to the release of the Senate Intelligence Committee’s report into CIA torture programmes, Edward Snowden told his audience that the things that we did as a result of this programme are inexcusable crimes. And what we see which is I think quite dangerous in the United States debate which is happening right now is that proponents of the torture programme are saying that even though there are international obligations to prosecute these – because they are serious crimes – torture cannot be justified under international law. It simply cannot be justified on the basis of emergency circumstances or the orders of higher government officials. That does not excuse you of liability for a crime.

And yet we see this being argued as precisely that case, which threatens to overturn the standards we set at the Nuremberg trials at the end of World War II. This is deeply corrosive, not just to the moral authority of the United States and the west more broadly, but the standard rule of law that is applied around the world. If the United States can allow its officials to torture and not hold them to account, what does this mean for governments of much more authoritarian states? What does this mean for governments in Asia, in Africa and elswhere around the world?

How is your security situation?

My security’s great. I live a fairly normal life, I ride the Moscow underground when I go about day to day. The only difference between then and now is that I’m not living in my home and I spend a lot more time working than I did previously.

I spend a lot of time working with the research communities and particularly the technical side of internet standards, to talk about how we can improve security for everyone around the world, regardless of what national laws they live under. Beyond that I also do a lot of work with activism and advocacy, which is quite new to me because before I was part of the structure of government, and now to be on the outside trying to reform government is a very different change of perspective. But it’s very fulfilling and I enjoy this work very much.

What has changed since you blew the whistle?

What I have seen has changed in the time time since I came forward is that public opinion and public awareness has changed dramatically across the world. Every country, every climate, in every time zone.

And this is significant because I didn’t want to change the world, I didn’t want to change the policies of my government, I simply believed that within a representative democracy our officials are elected to represent the people, not a particular institution and not a particular class, but the public broadly. And they can only do so on the basis of our votes, on the basis of what we believe our values as a society are. When programmes and institutions of government begin to happen increasingly in secret, we begin to divorce ourselves from the operations of government, we begin to be shut out of understanding our society and being able to cast informed votes.

Ultimately in a democracy the power of government depends on the consent of the governed. Its legitimacy is drawn from the idea that we the people direct its operations and cast our votes. If we don’t understand the broad policies and powers and programmes that they claim to be within their domain and the directions they take in their relations with the world, that which they do against us and that which they do in our name, we are no longer partners to government, we’ve become subjects of government and I think that that’s something the public deserves to know about.

Is it the fact of surveillance which is a problem, or just its scale?

The departure of the last decade in the way that intelligence agencies within the United States and outside have applied their surveillance authorities is that they have moved from a targeted basis, which is when I as an intelligence analyst have some reasonable suspicion that this individual is involved in wrongdoing because they’re a computer hacker targeting nuclear power plants or they’re an agent of a foreign government trying to break into an embassy’s email accounts or they’re a terrorist trying to cause violence.

I would go out and use this as the seed of an investigation; I would go out and compromise their systems of communication, the ones that are used exclusively by them – their cellular phone, their computer. This has changed over the last decade, in the wake of 9/11 in the United States, to what is an untargeted “bulk collection” programme, as the government calls it.

Civil society calls this “mass surveillance” instead of “bulk collection”, but even if we accept the term bulk collection on its face, what it implies is that rather than intercepting only the communications of those who are suspected of wrongdoing, we are now collecting in bulk the entirety of everyone in society’s communications and applying algorithms, we are applying “selectors” to what they call the haystack of an entire population’s communications.

Which is making decisions about who they are, what they’re doing and how the government feels about their population. We’ve seen instances in the past year, in for example the Huffington Post, where the National Security Agency in the United States has monitored the pornography viewing habits of people whose political views they consider extreme or radical but who were known to be unassociated with actual violence.

They were treating these individuals as terrorists, as people who had to be discredited and using their private lives, their sexual activities, their associations to discredit them in public on the basis of the political views that they hold.

We’ve seen increasingly over the past year – including just yesterday with the release of the torture report – that when we begin changing our values, in secret, when we begin changing the nature of the activities of state security organisations without any public accountability, it leads to a slippery slope where even if the intent is to put good purposes to what they call necessary ends, over the space of a very few years you find that ordinary and innocent individuals hav been treated in a terrible way as a result.