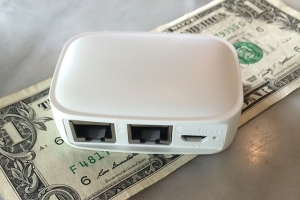 All August Germar asked for fund his privacy-focused router project. But as the attention and controversy around his Kickstarter crowdfunding campaign snowballed over the last five days, he found himself at one point with 82 times that amount—and now with nothing.

Kickstarter suspended the crowdfunding campaign for Anonabox, an initiative to sell a tiny router that would run all a user’s online traffic over the anonymity network Tor. The idea tapped into an explosive demand for simple privacy technology. But as funders shoveled more than half a million dollars into the project, they also began to pick apart Anonabox’s claims of creating custom hardware.